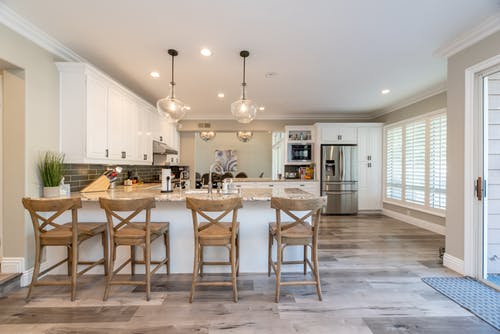 How to get Desired Kitchens & Baths by Remodelers When Esther Puckett and Pat Gaige bought their Snellville home five and a half years ago, they knew the kitchen desperately needed a remodel. “Everything was white!” Esther says.

Esther and Pat knew they wanted a change from the walls and cabinets to the appliances and even the white Formica countertops. Instead of rushing into a remodel, that didn’t address all their needs. They decided to live in the house for a while to determine what they truly hated about their small, outdated kitchen.

After two years of serious contemplation, Esther and Pat decided the time had come. They called on Bert Persichetti of Home Town Designs Inc. to tackle the project of turning their kitchen. It was more like two small rooms due to the middle’s peninsula, into an open place where they could cook with ease.

“They were looking for more space, so we moved the bathroom into the storage area and slid the kitchen into the bath area,” Bert says. Two walls had to tear down to accommodate the moves. Still, the result is a room that is more conducive to entertaining and much more efficient for cooking.

In addition to opening up the kitchen, Bert also gave Pat and Esther an additional vegetable sink with pull-out baskets, a ceramic-tile backsplash, new cabinets, and granite countertops.

“We fell in love with it,” Esther says. “We love to cook, and we finally have a cook’s kitchen, where everything is right where we need it to be.” I was tired of being embarrassed by their outdated kitchen whenever they entertain. Bill and Susie Armstrong decided it was time to update the kitchen in their split-level foyer ranch home in Atlanta. They called on Jonathan Tongyai of Southern Styles Remodeling Inc. to help them rearrange their space.

“They wanted a kitchen that was both functional and appealing to the eye,” Jonathan says. The biggest concern was the column between the kitchen and dining room. The position of the column moved to the island with a tight squeeze.

“We incorporated the existing column by using an island with an arch end,” Jonathan says. This change gave Armstrong more space between the island and the cabinets.

“We love the improved flow in our kitchen,” Bill says. “Whether we entertain couples or families, everyone can move around the kitchen comfortably.”

After dealing with the column, Southern Styles put in granite countertops, a tile backsplash, and custom-built maple cabinets.

“The cupboards go all the way to the ceiling, so not only do they look good, but they give us more storage,” Bill says. Another change that the Armstrongs are thrilled with is the addition of the dual-fuel Decor range. “I love being able to cook on a gas stove for the first time,” he says.

Southern Styles replaced the ceiling and put on a ceramic-tile floor. They also installed all new appliances.

“We got everything we wanted,” Bill says of the two-month project. “We kept the same layout, but use it in a much smarter way.” Whenever Sherri Kimmell and Wes Herman entertained at their Atlanta home, their dated kitchen always managed to be the hot spot.

“We do much entertaining, and no matter where we put the food or music, people always congregate in the kitchen,” Sherri says.

Their desire to bring the house’s focus into the kitchen led Sherri to Peter Bourget of Bourget Innovations Inc. in Norcross. He opened up their kitchen with some help from above. “By barreling the ceiling and then creating a second barrel over the island, we gave their kitchen the appearance,” Peter says. The illusion of more significant space is also created by the arched pass-through, which lets light flow freely between the kitchen and living room.

“I love how we took up the ceiling with the arches,” Sherri says. “It brings in so much light.”

In keeping with the arch theme, Peter added an arched glass-block window over the sink, allowing outside light to filter. “This kitchen is a different kind of wow, with different architectural accents,” he says. “It’s an elegant design.”

Peter also changed some critical aspects of the kitchen. Gone is the peninsula and, in its place, an island. The slate backsplash and natural maple cabinets with glass shelving and doors add space, light, and beauty to the kitchen.

The finishing touch to the kitchen, designed by Victor Struminger, was the detailed stone border around the hardwood floor. The fence visually separates the kitchen from the other rooms in the house.

Sherri says the changes have made a massive difference in her home. “It has changed the whole flow of the main floor,” she says. “And as a side benefit that I didn’t anticipate, it made the adjoining rooms nicer.” With every other room in their 1970s style Marietta home beautifully updated, Dale and Keely Content decided the time had come to tackle the hall bathroom.

“It was just not very attractive,” Dale says. “It needed to be updated to flow with our style in the rest of the house.” Dale, owner of Atlanta Design & Build in Marietta, had the expertise to design and oversee the project. The Contents decided to go with an eclectic style that Dale describes as Tuscan and Southwestern. In keeping with their global tastes, they ended up using products from around the world. The tiles, named China Multi-Color, are from India, the sink is from South Africa, and the faucet is from Spain, to name a few.

The impetus for the bathroom design was the vessel sink Keely found at European Sink. “Once we found the sink, we took colors from it to decorate the rest of the bathroom,” Keely says.

The concrete countertop and tile walls complement the color and style of the sink. “We wanted the countertops to look old,” Dale says. “They have an antique look to them, almost like leather.”

The cabinets also have an Old World flavor to them—something both Dale and Keely say they love. “The cabinets were hard to find, but Keely loves them,” Dale says.

Staggered cabinets and a frameless, inset mirror surrounded by tile create interest and depth. But the finishing touch is the ironwork scattered throughout the bathroom, which Keely found.

The outcome of the three-week project (done a little at a time) is a bathroom both Dale and Keely and guests, please. “My mother-in-law came to visit,” Dale says. “And she said this is her favorite room in the house.” Tired of their outdated bathroom, Marty and Kimberly Porter put remodeling it at the top of their home-improvement list. “It was pink, and I hated the color,” Kimberly says. “It didn’t flow well, and I was concerned that someone was going to slip and fall.”

After checking references with the National Association of the Remodeling Industry (NARI), the Porters decided to enlist Small Carpenters at Large.

“They wanted very clean and simple lines and wanted the space to feel as open as possible,” says Amanda Johnson, designer for Small Carpenters.

The inspiration for the clean and simple lines was a contemporary pedestal sink Kimberly purchased at Lowe’s.

Small Carpenters began by opening up the linen closet and removing the walls up to the ceiling. In its place, a nook creates for the toilet. That change alone created the feeling of openness that everyone aiming.

“Before, that space wasn’t functional, but just cutting off 13 inches opened up the room,” Kimberly says.

The tub/shower replaces with a new shower that has a traditional and a handheld showerhead. “It gives us so much flexibility,” Kimberly says. “It’s what I like best about the remodel.”

Next, they replaced the double-hung window with a glass block, which provides privacy without window treatments and reflects the contemporary style.

Small Carpenters created a wall shelf that has little cubbies to provide a clutter-free storage area. They also installed a matching linen closet on the opposite wall to help tie the look together.

The project’s result is a quality bathroom, both inside and out, and something the Porters are, please. “When we started, I didn’t realize how involved this process is,” Kimberly says. “I’m impressed, and everything turned out very nicely.” A desire to have more room in the shower and update an old design prompted homeowners in Vinings to contact RLS Construction Inc. to remodel their 20-year-old bathroom.

“There were several things that needed attention,” one of the homeowners says. “The shower was too small, there was carpeting in the sink area, and the traffic flow needed improvement.” They had used RLS before and were pleased with the results, so the homeowners decided to use them again.

“Their goal was to update the bathroom and give it a more contemporary style,” says Jan Studdard of RLS Construction.

The entire bathroom was gutted and rebuilt from the ground up. “We created a separate area for the shower and toilet, which makes better use of natural light and improves the traffic flow,” Jan says.

RLS installed an elongated oval-shaped tub in the middle of the room, making it the natural focal point. Other interesting aspects are the frosted-glass doors from the closet into the bath and water closet. Using hardware provided by the homeowners, RLS was able to create a complementary style.

This style even extends to the wallpaper, which the homeowners selected. “I wanted something open, and I didn’t want to take away from the finishes we had already chosen,” she says. “It blends nicely and goes with the graining of the marble.”

Also, putting the sinks up high makes the sink and counter area more user-friendly, the homeowners say. The result of the nine-month project is a bathroom that the homeowners most liked.

“It’s a smaller amount of space, but it is used so much more efficiently and looks larger,” she says.

As for those considering a bathroom remodel, the homeowner’s stress. “A good design doesn’t cost any more than a bad one, and it’s important to get all your ducks in a row before you begin.”

A Treat for the Eyes- Get inspired by these amazing kitchen and bath transformations.