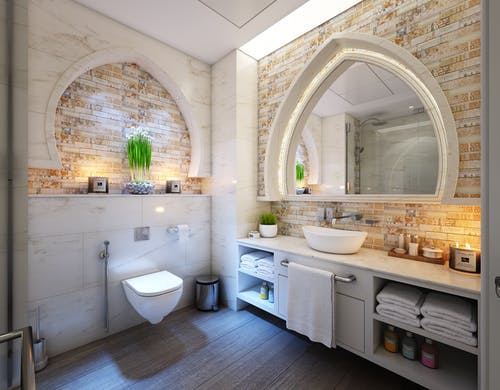 A Treat for the Eyes- Get inspired by these amazing kitchen and bath transformations.

Tired of tiny rooms for every purpose, this bathroom had one toilet in with the tub and another with the shower, and, structurally, the floor system was uneven.

This bathroom was taken from a cramped, confusing floor plan with busy ivy wallpaper to a spacious room with neutral tones that can’t overpower the senses. The result is the feeling of a picturesque villa found within the distressed cabinets, wall shelves, and iron fixtures. The lighter blue and pink granite shower and tub highlight the cherry cabinets. A cutout in the shower wall provides space for shampoo and is mimicked by the cherry window boxes on the wall above the tub. This little bathroom never knew what hit it. With the help of a spare bedroom/storage room, the house’s one small bathroom turned into a luxurious master bathroom and a half-bath/laundry room.

Get Your Dream Kitchen or Bath the original space to house a toilet, sink, and washer/dryer. Simultaneously, the new master bath equipped with a whirlpool tub and a full walk-in shower featuring natural granite surround.

Custom Linen Armoire in the Hallway

In the hallway, the custom linen armoire matches the vanity in the master bath—polished nickel plumbing and cabinet hardware highlight the granite tile and oak flooring. Two acrylic block windows allow light to come in without sacrificing privacy. Ice blue walls impart contrast to the darker cabinets without being traditional white. It began as a boring bathroom with an outdated feel. “Straight out of the 70s,” says Mark Buelow of Distinctive Remodeling Solutions. The bathroom did have the original 1975 brown tile on the floor and brown cultured marble on the countertops.

The second issue was that even as a master bathroom, it had only one vanity. The project began by removing just about everything: pantry, cabinets, toilet, tile floor, tub, wall tiles, and drywall. The floorboards draw to adjust the plumbing in the new shower and add a second sink and vanity. As an added benefit, the electrical, drywall, and plumbing brought up to code.

The darker tile adds to the floor and upper shower wall, while lighter tiles use on the lower shower wall; cultured marble countertops also chose. The finished look is updated, simple, and elegant. With the double vanity, it has become a bathroom built for two. Even without concrete walls, privacy is key to this bathroom. The glass block dividers provide discretion without seclusion. They also allow the space to remain open.

From five little rooms,” this bathroom turned into one sweeping space, all the while maintaining a sense of privacy with the use of glass block dividers. Remember the term “water closet?” Initially, the toilet, shower, and the tub each merited separate rooms, while three small closets further divided the space.

Think “1970s, 1980s compartmentalization,” says Dale Contant of Atlanta Design & Build. Instead of a tub, the client opted for a large shower with multiple showerheads and a seat semi-enclosed by a curved glass wall for a nostalgic style that lets in plenty of light.

A Linen Cabinet and Corner Cabinet

The mini-closets combined into one grand walk-in, and both a linen cabinet and corner cabinet added. Unique details include a lazy Susan for toiletries and a heated tile floor. According to owner Karen McClaskey, the result is a peaceful, luxurious room that is pretty enough for her but not too feminine for her husband. Wooden appliqués, crown moulding, skirt moulding, and other small touches add to the  get Desired Kitchens & Baths by Remodelers
In the beginning, a family of six had to exist in this 1970s kitchen. It was not only inadequate for their living needs, but also dysfunctional with separated areas for a table, an oddly placed door, and a washer and dryer. It was a real “zig-zag,” according to Jim Farrell and Scott Loyed of Finishing Touches Interiors.

The challenges met. Space turned into a kitchen that hides and stores many kitchen necessities in a relaxing and Old World Tuscan feeling. In the dining area, Finishing Touches removed the old table. They replaced it with a built-in booth that provides storage under its seats. Working around the existing cabinetry, they removed the pantry and replaced it with a beverage centre. They also added total cabinet space, created a concealed trash area, hid the microwave behind a door.

Built a matching closet around the washer and dryer and put a cabinet around the refrigerator. They chose granite tile for the countertops. Besides providing a more comprehensive design selection than slab granite, tile is less expensive and can easily replace or repair.

Eighteen-inch travertine stone uses on the kitchen floor with a tumbled marble border between the kitchen and hallway and the dining room. All the cabinets received wood appliqués, which mimic sculpture. At the same time, crown molding above and skirt molding below became the sites for various lighting. Each element collaborates to produce a look with time-honored charm and modern functionality. “I just love my kitchen,” the owner told Galey after the remodel. Smooth countertops provide straightforward maintenance and keep the straight flow of the kitchen. This smoothness imitates by the ceiling and honey-colored cabinets and floors. New, more straightforward admission to the former breakfast area allows access to the back deck where the oft-used grill keeps.

Initially, this kitchen was cramped, contained little prep space, and had a jutting wall that attacked people as they walked into the small rear breakfast room. The finished look was one unified space that Magnet Construction Services created by focusing on three key elements.

First, they removed the jutting wall. “Anybody would have taken that wall down,” says Mark Galey of Magnet Construction. Once the wall was gone, the rear table was also done away with and replaced with a farther back and less obstructive peninsula than the original wall. Claiming the former table space and replacing it with the arm now provides space for seating and adds countertop space for food prep.

The third task was to shift the stove 18 inches to the left, which created a landing space next to the refrigerator (more counter space), perfect for a load of groceries. Can lights, under-counter lighting, and a laminated ceiling (adding sheetrock). The formerly stark white cramped kitchen now boasts a clean, contemporary look that is also more functional. The kitchen is not separated from the adjacent room, allowing the space to remain open and its size to appear larger. The small boxy rooms are no more.

Beginning with a functional kitchen in good condition and a claustrophobic feeling—possibly the fault of glossy black cabinets—this kitchen transformed into an elegant, contemporary space.

“The goal is to take the existing footprint for the house’s public space and recreate it as a dynamic. Fluid continuum of space with subtle detailing and minimal visual noise” says William Fadul, president of The Building Firm.
The project required a significant opening of space and headers, and vertical supports needed. Added recessed ceiling space necessitated re-supporting the ceiling system.

The final look achieves recessed lighting in the ceiling, zebrawood millwork, and Brazilian cherry floors. Besides accented by an entire wall of windows, natural light allows for an uncluttered, open look that, while it is ultramodern, is neither slick nor cold. The high-end results have little in common with the room’s initial look. The kitchen is not separated from the adjacent room, allowing the space to remain open and its size to appear larger. The small boxy rooms are no more.

Even more than its obvious design concerns (cramped layout, outdated, all one color), this kitchen and house had some major structural issues. “In two words, the house built badly,” says Jerome Quinn, president of SawHorse.
The original slate floor sloped, and the house did not have proper drainage, so flooding had caused rot. The kitchen itself was exceedingly narrow and would not accommodate space for the growing (up) family.

The solution was to borrow space from the adjacent formal living room. The kitchen went from a boxy and confining space to an open, inviting place with room for the entire family to congregate. The cabinets’ warm tones replicate those of the floor, a stylish improvement over the former white cabinets and gray slate floor. The circular granite table matches the countertops, creating a sense of drama.